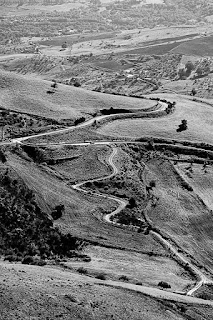 And yet the entire circle
Is still not more than zero
But if it touches yours
It's Infinite. ∞

OBS: The period from 17th of Tammuz to the 9th of Av is known as the 3 Weeks (although it has 22 days). It is a period of mourning followed by seven weeks of consolation. The seven weeks of the Omer is also a period mourning, and both the three weeks and the seven weeks will be times of joy in the future. The seven weeks is connected to the seven emotional sefirot, and the three weeks appear to be connected to the twenty-two Hebrew letters. The reading for the 9th of Av, Lamentations, is in acrostic form, with each chapter having a verse for each letter (chapter 3 has three for each),

The number Pi is almost exactly the ratio of twenty-two divided by seven. Area is defined as Pi (22/7) x the Square of the Radius, and the Circumference is 2 x Pi (22/7) x Radius.
Posted by Kahane at 1:21 PM No comments:

There are days
When the waters
Are stilled
And one
Simply
Reflects
The light
That is all.

Others are
Hurricanes
And along
With the waves
White flames rage
And consume
All that's left
From inside
That's not kosher.

Some are
Pegasus
Days, which
Can fly
Yet be
Harnessed,
Often with
One single
Horn to
Give focus.

Gryphon days
Grasp you
Hard, while
Jetting out
Roars that
Intimidate
Shock and
Inspire.

Instead of
Healing hooves
They have
Fangs sharply
Filed, so
Beware
When in
Their line
of fire.

Posted by Kahane at 7:07 AM No comments:

Alive at Week's End
Not because
I earn or
Spend


But because
I yearn,
Expand.

Weak finished,
I learn to
Stand

Witness,
Return, and
Mend.
Posted by Kahane at 10:40 AM No comments: